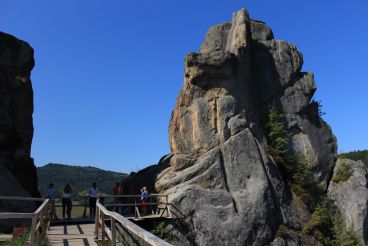 The western part of Ukraine knows many architects who left the heritage, in particular, masterpieces of Catholics and Orthodox temples, Middle Age castles, ancient narrow streets…However, a greatest artist and architect to be invariably up-to the mark to embellish Ukraine is a nature. Sometimes it seems it works miracles using its wonders “building materials” and colorful palette. Thus, the godly nature gave the world one of its gems – Uryts’ki skeli. They are located close to the village of Urych Skolevs’kyi district of L’viv region. You can easily get to this place.

But to make the trip more interesting and adventurous, you may use a specific “Karpats’kyi tram” which is an absorbing touristic route along the ancient, recently rebuilt, narrow gauge railway road, once jointed Boikovschina and Austria-Hungary in the 17th century. 2 days tour starts and ends in L’viv, combining the most interesting places: the museum of "State Historical – Cultural reserve", “Tustan’”, "Uryts’ki skeli", "Hoshevs’kyi cloister" on the Yasna Mountain, the excursion of narrow-gauge railway road of “Myzuns’ka Branch” etc.

The most significant heritage site are greatest 50 meters rocks, which appeared 55 ml years ago in result of erosion of heavy sandstones of Paleocene which were used by antique tribal people as sanctuary many years ago. Those are famous Uryts’ki skeli. An extraordinary incredible place! In result of centuries-old natural and tectonic modifications the certain sheer side occurred as well as big monoliths and confusedly formed blocks. On the whole, the rocks form 7 groups:  Stone (in the centre), Sharp Stone, Mala Skelia, Gutter, Hul’ko, Cross and one of the rocks without the name.

In the 11th-13th centuries, an old-Russian fortress Tustan’ which served to defend against Mongolian and Turkish invasions, was located at this territory. Initially, it was a wooden one, being rebuilt lots of times with stone constructions, while natural rocks were its walls. A beneficial location furthered the city-fortress was a go-between of trade-roads as a checkpoint to the Carpathian crossings. It was a peculiar frontier customs center between Halytsko-Volyns’ke principality and Hungary, later –the Polish kingdom and Hungary.

The castle existed up to the 16th century and then it stopped to be a custom and failed. Up to the moment, one may observe its remains, cut off grottos on the rocks, wells, subways, wooden constructions of the 10th century (the fragments of bars, planking with joggles, lathes and others).  Also metal items were found in the rocks: dragger, shield of the seal ring with engraved image of the bird, bronze mace of the 13th century, sledgehammer, and axes, tips of the arrows and spears, ceramics, glass, leather articles. These and the other findings you may see in the museum of the history of the city-fortress Tustan’ in Urych village.

But the biggest admiration is petroglifs – rock paintings). They prove the residence of a human being at the territory of pagan culture. Lots of these images – are the sun signs –the symbols of the Sun, to be honored by ancient people. One may see these signs all over the world, however, the meaning of the symbols are not decoded. Thus, they are of a great archeological and historical importance.  You will also see 2 meters face image, a rider of the horse or wolf, a dancing person, a wheel of Jupiter and many other images carved on the rock.

Today, Uryts’ki skeli is the part of National natural park “Skolevs’ki Beskidy”, which safes and analyzes the unique landscapes of western part of the Carpathians. You are to discover not only the history of these lands of pre-Mongolian period, but to enjoy the beauty of the nature. It is recommended to come here early in the morning, when Uryts’ki skeli are covered by clear haze of the morning fog, while sunbeams light up its pictorial slopes.