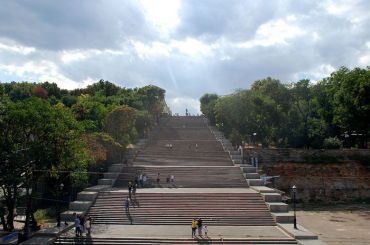 All brave and wonderful deeds are performed for the sake of love and its striking demonstration is the Potemkin Stairs in Odesa. In the mid-19th century, Prince Vorontsov made a gift to his wife, Elizabeth, ordering to build a staircase, which would have joined the sea port and the city itself. Previously, people had to use footpaths and narrow wooden stairs to get to the sea. Thanks to strong love of the prince, Odesa acquired its gem and the citizens could freely get to the sea.

The Potemkin Stairs are among the ten most beautiful staircases in Europe, ranking there the sixth place. The idea belonged to Abraham Melnikov, an architect of genius, and the design was done by an eminent Italian architect Francesco Boffo in 1825. The stairs of an interesting visual and architectural design are in a harmonious blend with the boulevard. Originally the stairs were built of local limestone, and in 1933 the city authorities ordered to reconstruct it using granite in combination with paved areas.

Initially the staircase led down up to the coast, and consisted of 200 steps and 10 landings, however after Prymors’ky Boulevard was built, eight steps were lost under asphalt, reducing the number to 192. The grandeur of the construction wasn’t lost and today many tour guides begin their excursions from the top of the stairs, and then offer to go downstairs in order to experience the idea of its architect. On the top of the stairs you can see the Monument to Duke with magnificent view of the sea port with its beautiful ships. Looking down, it seems nothing to get to the sea, as due to optical illusion only ten landings are visible. Downstairs you might notice these landings are invisible and you see an infinite number of granite steps. What a majestic construction! One more illusion should be mentioned: the stairs go wider down to the bottom so visually its parapets look parallel.

To overcome 192 steps is not easy; therefore, two-line funicular is located next to the stairs, so within minutes you could go down or up. It was built in 1902, and later was replaced by an escalator; however since 2005 a new funicular line has been welcoming its visitors.

The stairs bore different names: Bul’varna, Mis’ka, Gigants’ka, but it was Sergei Eisenstein who glorified it to the world and contributed to its current name as it was filmed in some scenes of his film "the Battleship Potemkin". Since then, the Potemkin Stairs are world famous.

The Potemkin Stairs are one of the most famous places of Odesa. During the city celebrations they are used as a great platform to watch fireworks.

What is the best accessible to the The Potemkin Stairs from: