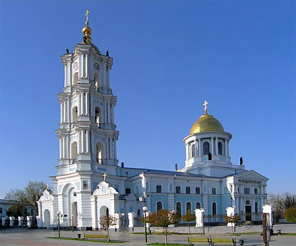 In the ancient Ukrainian city of Sumy is a lot of unique examples of architecture of the past centuries. Being in this northeastern city, be sure to visit the Orthodox shrines. Particularly noteworthy is the Savior Transfiguration Cathedral. This magnificent temple, one of the brightest architectural attractions Aggr.

History of building Holy Transfiguration Church originates from the base of the city. In the sixties of the 16th century a little north of the modern cathedral wooden church was built in honor of the Transfiguration of the Lord. It burned down after one of the Tatar invasions. However, in its place thanks to the founder Colonel Sum Gerasim Kondratyev was erected the new shrine. Last renovation in 1882-1892 gave the Saviour's Transfiguration Cathedral the form that it has today.

The first thing that you should pay your attention, looking at the Transfiguration Cathedral, this five-tiered bell tower. Its height is 56 meters, which allows there to survey the whole central part of the city. Be sure to take advantage of this opportunity. At the top of the belfry chimes set, designed like a model of the Kremlin. She completed a golden dome.

All the architectural composition of the temple has no explicit single-style building. It harmoniously intertwined features of the Renaissance, Baroque and Classicism. This indicates a different time of construction of various extensions of the cathedral.

Transfiguration Church has a two-tier structure. The first tier is dedicated to the Transfiguration. The second was built in honor of the Annunciation of the Mother of God. Facade of the Cathedral framed double portico, on both sides of the main entrance is a mosaic masonry. Four central columns decorated capitals in the Corinthian style. Another unique part of the cathedral are eight three-meter iron sculptures, arranged on four sides by the main dome and belfry. The central arch is decorated with figures of apostles. Paul looks at the north-east, Peter - in the south-east, while two absolutely identical statues of Prince Vladimir look south and northwest. On the four sides of the belfry are sculptures of the Evangelists Luke, Mark, John and Matthew.

Inside the Spaso-Preobrazhensky cathedral is no less interesting. Pay attention to the four-story marble iconostasis with the addition of Sumy malachite. Above it worked sculptor Sergei Orlov and talented artist Vladimir Makovsky church. The walls of the temple are decorated with paintings and Anatoly Lebedev Claudia Shorohova. There is also a local relic, which is spoken by the inhabitants of the city, preserves all sumchan. This Korsun Mother of God icon, known as "insight." This icon received the name for its ability to give sight to the blind.

Spaso-Preobrazhensky Cathedral is one of the main pedestrian street of the city - the Cathedral, 31. To her, you can reach any part of the city.

What is the best accessible to the Savior-Transfiguration Cathedral from: