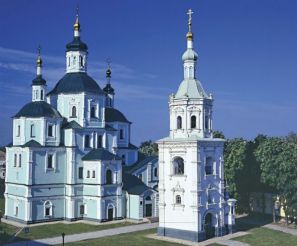 Resurrection Cathedral - is the largest temple of the city of Sumy. That`s it, more often than the other attractions of the regional center, portrayed on tourist souvenirs.

Most of the religious buildings in Ukraine covered with legends. Resurrection Cathedral was no exception. Built in the 17-18th centuries, the temple became a bright representative of the Ukrainian Baroque style. In the construction of the church took an active part of the city founder G. Kondratiev. According to legend, in the walls of the cathedral immured his sister - a gang of bandits atamansha Mary, whose brother thus punished for her misdeeds.

Long time residents of the Resurrection Temple defended from attacks of the enemy troops. Thick walls and a large number of underground passages makes the Church the best fortifications.

At the present time the territory of the Resurrection church - is a church complex, which consists of the main building of the bell tower with openwork lattice and the sculpture "Rock of Love." Interestingly, the last two objects have appeared in the 20th century. Nevertheless, this favorite places citizens and tourists for photo shoots.

"Rock of Love" is an iconic place for all lovers. The basis of this attraction was the rock of Cana - the city in which Jesus Christ has blessed the young family. In the belief that touching the sculpture brings love, luck in relationships.

Sum is the oldest temple in the neighborhood of Transfiguration Cathedral . In the daytime, these structures complement each other, and at dusk Resurrection Church lost in the shadow of his brightly lit brother.

Curiously, the Resurrection Church - is the only building that has preserved the harmonious combination of stone and wooden Ukrainian architecture. The lower tier of the church consecrated in the name of St. Andrew, and the top - the Resurrection.

What is the best accessible to the Holy Resurrection Cathedral in Sumy from: