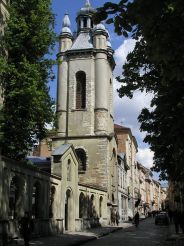 In the second half of the 13th century on the territory of historical centre of L’viv there was an area, where the Armenians used to live. At that time Armenian Diaspora sprang up in L’viv. An architect Doring has designed Armenian Cathedral, which became the centre of cultural and spiritual life of the Armenians. Due to the fact this cathedral has much in common with churches in Armenia, it is believed that Armenian masters took part in building of this cathedral. It was renewed and rebuilt many times, that’s why you might notice different architectural styles in Armenian Cathedral ensemble: Armenian-Oriental style of the 14th century, Renaissance, Baroque of the 17th century, Oriental style of the beginning of the 20th century.

A wonderful tower-belfry, which is located in front of the cathedral’s entrance, will impress every visitor and give unforgettable impressions. It was built by a famous architect Petro Krasovs’kyi in 1571. Then your attention will be attracted by a famous wooden chapel of the 18th century decorated with marvelous carving ornaments. You’ll notice a sanctuary depicting Christ on Calvary Mount. This historical site is in a list of UNESCO world heritage sites.

The cathedral’s yard is flagged; some of slabs are installed in the wall. An old Armenian churchyard has been preserved here. Tombstones from other Armenian churches were carried to this place. If you enter the cathedral from Krakivs’ka Street you’ll see tombstones of the 16th-17th centuries with different well-preserved inscriptions.

In the East Yard you’ll notice a column of St Christopher dating back to the year of 1762, which will impress you with its refinement as it is a real masterpiece. Not far from that place there is a former palace of the Armenian metropolitans of the 17th century.

Real beauty awaits you inside of Armenian Cathedral! You’ll get a feeling of a fairytale there. There are a few stained-glass windows, which let the light go through creating a wonderful shining. The walls are decorated with mosaic, which is in a great combination of little stones and smalt.

Wall paintings with Armenian motives are of a great value today. Both frescoes depicting The Lust Supper and the Crucifixion are created by a Polish artist Yan Genrih Rosen. You can see famous frescoes in the main part of the cathedral. The fresco “Apparition of Katherine Yemmerih” is interesting as well. Feet of depicted angels don’t touch the ground. The artist has painted flame at the feet symbolizing their supernatural essence. The fresco “Burial of St Odion” is worth to see. Odion is considered to be a person, who initiated celebration of All Hallows Day. The fresco has a deep meaning and symbolizes the time. The artist Yan Genrih Rosen depicted Odion’s burial on the background of the starry sky and the Last Judgment painting. Three monks carry a coffin of the saint. You might notice three allegories here, which symbolize past, present and future. The last monk, who carries the Odion’s corpse, is depicted with a hood over his head and is a symbol of the past, which will never be back. The second monk looks at you – it is our present. The most mysterious figure is the first monk. His head is hanged and eyes are closed. It is our future, which is unknown and we have to accept it. Souls of the dead carrying candles accompany the monks.

You’ll see many mysterious frescoes in the cathedral. Visit Armenian Cathedral and you’ll get to know its history, where each little stone, each bright work, each image reminds the glorious past created by Armenian society, artists and architects.

What is the best accessible to the Armenian Cathedral from: