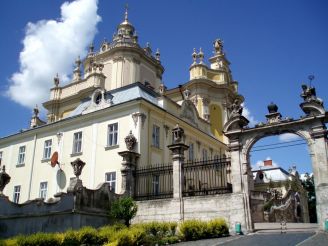 St. Yur’s Cathedral, like a symbol of the sky triumphs over the anxieties of the world towers gently and gracefully, on the top of the hill. It was constructed under the project of Meretyn, the Austrian architecture.

This site is a gem of Ukrainian architecture of the late baroque epoch. Baroque spirit of the church looks like a symphony in a stone, but, at the same time it is a part of Ukrainian soul. This sight is out of architectural frames. St. Yur’s Cathedral is something more than an ordinary temple. L’viv people come to this sacred place to salve its soul. You are also welcome to the cathedral in order to be lost in a wonderful world of baroque style beauty and splendor.

The cathedral has an interesting legend of its initiation. Yet in the 13th century a fearful dragon lived in a cave of the hill; later a cloister and a church were built in that place. From the cave one could hear its heavy breath that frightened local people. Mytropolit Lev Sheptyts’kyi ordered to brick up the cave. The other version voices Lev Danylovych, the prince, killed its creature at the end of the 13th century. So people constructed a cathedral on the hill in honor of victor of the monster.

In the 15th century a whole cloister grew on that hill, a place B. Khmel’nyts’kyi in the flesh lived in and received guests from Poland. This cloister did not remain; later a new baroque complex was erected. And today, the cathedral charms by its uniqueness, architectural complex in particular.

An observer can not see it at once, as it appears little by little. Firstly, you pass the main gaits, crowned by decorative vases and gablet in baroque style. Then the leads to the square in front of the cathedral where, yet in the 17th-19th centuries Sviatoiurs’ki fair took place: tradesmen gathered from many countries while, on account of the festival, L’viv ladies baked “yurashky” – special honey cakes of a different shape.

That is why, in order to enter a square, you need to pass trough one more gates, adorned with dynamic statues to symbolize Hope, Faith, Greek and Russian churches. In fact, the idea of 2 churches unity (Orthodox and Catholic ones) played a specific symbolical role on building decor. From the side of the cathedral you will see a belfry, constructed under the project of Haieca, the architecture. An old-time bell of princely times remained in the belfry. It was shot carefully and neatly by the unsurpassed master, named Yakov Skoryi. Reliefs to adorn the bell are characterized by mastery in the art and image sharpness. Like in the past, today, this antique bell (1341) calls religious people to pray.

To get into the cathedral, you should climb front staircases beautified by allegorical figures of geniuses as St. Lev and St. Afanasii. Over the entrance you will see a balcony and the attic above it, crowned with a stud statue of Yuriy Zmiieborts’. This sculptural design of the facade of the cathedral and the sculpture of Lev and St. Afanasiy belong to Pinzel’, a genius artist, kind of “Mikelandzhelo" of baroque style. Its characters seem to be vivid; a stream of emotions and life power are in their vehement gestures. Have a look the mastery every small lantern to adorn the facade of the cathedral is engraved. Thus, having entered the cathedral, the first things to draw your attention are facile, out of the common beauty Ukrainian fancy works, skillfully-made works of Ukrainian women and nuns as if diaphanous iconostasis.

An altar of the cathedral is decorated with icons and figures of seers of Luki, Dolyns’kyi, the outstanding Ukrainian artist of the 18th century. He was granted with gold seal ring of Yosyf II, the Austrian emperor.

Look round a precious relic of the cathedral, wonder-working icon of Trebovlians’ka Mother of God (17th century). A legend voices, in 1663, in a course of 40 days the eyes of Bohorodytsia (Mother of God) shed the tears, warning about a misfortune (Turks’ attack). In 1704 the icon shed tears when Karl XII occupied L’viv. Present scientists analyzed the icon and confirmed the rests of liquid remind so much human tears.

What is the best accessible to the St George Cathedral in Lviv from: