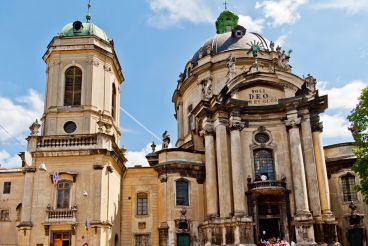 In the central part of a legendary city L’viv on Muzeina Square one of the most famous and beautiful churches of the city is located. It is Dominican Church. Its foundations were laid in the instance of Hungarian Princess Costanzia, who was going to marry Ukrainian Prince Lev Danylovych. She was a Catholic and the Dominicans came to support her faith.

Dominican Order is one of the oldest Catholic orders. It was found in Toulouse in 1213 by the monk Dominic for the purpose of a struggle with heretics. At first poor monks belonged to this order, later it became one of the richest societies in Europe. Theology and scholasticism were taught there. Monasteries of Dominican Order were opened in Europe. Educational institutions of the biggest European cities were under their control.

The Dominicans have obtained a permit to build a catholic monastery in L’viv. The first wooden church was replaced by a new one. In the 16th century the Dominicans built a brick cathedral in Gothic style. It used to be a defence building, which was of a great importance for many military operations. Dating back to the year of 1769 Dominican Church was built on this place. A military engineer Jan de Witte has designed it.

Nowadays it is a great architectural site in late baroque. Your attention will be attracted by the Latin inscription on the façade of the building: “Soli Deo Honor et Gloria” meaning “Honour and glory be to God alone”. The church looks majestic with its sculptural and ornamental decorations. Its mystical spirit will impress you! Over one of the windows you’ll see Dominican coat of arms, which depicts a dog lying on the Bible under the crown. It has a torch in teeth and fire explodes out of its mouth. It symbolizes the Dominicans’ struggle with heretics. Under the majestic cupola of the church you’ll see wooden sculptures of the Dominicans including figures of St Dominic and St Augustine. The luxurious decor of the church is in a great combination with its majestic interior. Noble gold colour of inner decorations create an atmosphere of solemnity. Its interior is remarkable with gravestones; the most interesting among them is Jusefa Barkovs’ka Gravestone from the St Dominic Chapel. The main sanctuary of the church is decorated with gilded wooden sculptures of St Luca, St Ivan Khrestytel’, St Petro and St Pavlo.

You might hear many interesting stories about Dominican Church. One of them is about a beautiful girl, Gal’shka and her love to Prince Symeon. She was a very rich heiress of the Ostroz’kyi family. Polish voivode Luca wanted to marry her to take possession of these treasures. He besieged a monastery, where Gal’shka was hiding. Water supply was cut off in the monastery. The trade suspended for a few weeks in the entire city. An irritated king could stand no longer and put an end to the war. This is how his daughter married the martial Luca. It was a terrible life with a cruel husband. Soon Gal’shka died, but Luca didn’t get any of her treasures.

Dominican Church is a very famous place of pilgrimage – thousands of tourists are impressed with its importance and significance.

What is the best accessible to the Dominican Church in Lviv from: