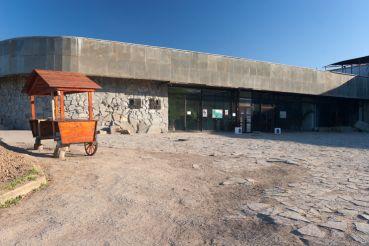 Objects of public utilities located on the island of Khortytsya. It was created by working scientists and dozens of the best representatives of Ukrainian intelligentsia. Today it is one of the most famous museums in Ukraine, where collected more than 32,000 valuable items.

The history of the museum began in 1983, when the island Khortytsya opened the Museum of the History of Zaporizhia. Then its area was 1600 square meters. Over time, the growing interest in the study of Cossack theme. This was the reason for redevelopment of the museum. Created new exhibition devoted to the life of Zaporizhzhya Cossacks. Conducted on the island of New excavations.

Today the museum preserves more than 30,000 artifacts covering the history from ancient times to the modern era. Also, there are exhibitions that introduce visitors to the period of Kievan Rus, the Cossack era, etc.. One of the interesting facts conclusive Museum - Diorama "Battle of Kiev prince Svyatoslav," "Military Council to Host" and "Liberation of Zaporizhzhya October 14, 1943." Visitors have the opportunity to go behind the scenes and dioramas to learn more about the technique of their construction.

In addition, everyone can see a collection of stone sculptures of the Bronze Age and the Middle Ages, Orthodox priests wear 13 - 19 centuries and see the collection of icons, tiles, glassware, coins, cards, weapons and even leather goods found at the battle Berestetskiy 17th century. The museum has also a unique collection of old 17 - 18 th century, the most interesting is the rite of the Church of Intercession Sich in 1757.

Cossack museum famous and historical questions. So close to the walls is a huge mound overlooking the picturesque view of the dam. Historians still can not determine its exact origin. However, most scholars are inclined to believe that the mound - nothing like Scythian burial! Another mystery island on which the objects of public utilities is a stone pillar, which says that there is likely to kill the prince Svyatoslav. And right next to another mystery - black stone, which, they say, has magical powers.

What is the best accessible to the The Zaporizhian Cossacks History Museum from: