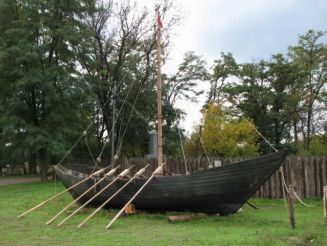 Maritime Museum "The Seagull" is located in the city of Zaporozhye, on the island of Khortytsya, near the equestrian theater "Zaporizhzhya Cossacks" . The appearance of the museum would be impossible without major exhibits - two ships, raised from the bottom of the Dnieper River. Unofficially, the museum is open from 1999. It was then that the surface was raised Cossack gull. Later in the museum`s collection appeared brigantine, dowel-boat, and the boat-Baidak odnoderevka. These exhibits are in the process of restoration and will soon appear before the visitors in all its glory. Cossack boat "The Seagull" was found near the island of Khortytsya . Surprisingly, the time and the sand is not very damaged ship, the reconstruction was minimal, allowing it to maintain primitive finds. It is the only museum exhibit ready, in the process of restoration remains a few more ships. Unique finding is also brigantine, once such swimming facilities in the Dnieper flotilla was 20 years in the future exposure Baidak supplement a century-old and two exhibits, presented by the locals. Because of this the visitors appear complete picture of historical flotation devices. In Ukraine, there is no more such a museum. Visitors to the "Seagull" can not only see unique finds, but also learn a lot about river navigation, and museum staff tell guests many interesting legends.

What is the best accessible to the Chaika Shipping Museum from: