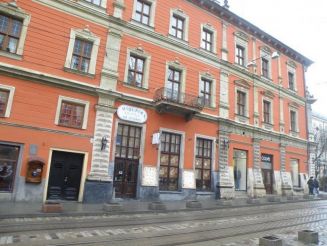 Rynok Square in L’viv is well visited by tourists from all around the world and one of its most interesting features is its architecture made mostly in the Renaissance style, where each kam’ianytsia (a building of stone and brick) is unique, differs from the others and attracts tourists with its mysteries.

One of such mysterious buildings is a kam’ianytsia numbered 23, located on the corner of Galyts’ka and Beryndy Streets. This is Scholz-Wolf House. By the way, next to this beautiful kam’ianytsia you can see a track of an electric tram, founded in 1894, which appeared one of the first in Europe, and by this time citizens used a horse tram.

The house was built in the 16th century and it belonged to a family of merchants. The progenitor of the family was a well known merchant Wolf Scholz. Family owned several buildings on the square, and one of the reasons is that the merchant and his wife Beata had 12 sons and 12 daughters! The Scholtz family originally came from Silesia, where houses were traditionally decorated by sculptures depicting real people. That is why on its pilasters you can notice sculpture portraits of different people of L’viv those times. People say many of them are real prototypes. So you will be able to get to know how people looked like in the 16th century. Images of a jester and a devil were made in the style of Grotesque. On the pilasters of the first floor you can see a lion sculpture, the symbol of L’viv.

"Baptism of Jesus Christ" located at the corner of the building is an interesting sculpture and is worth your attention, as the use of biblical images were typical of Silesia architecture. You will see a figure of Fortune, the goddess, as well as inscriptions in Latin - that is an interesting combination. Those who are fond of Renaissance architecture no doubts would like to see facades of this amazing kam’ianytsia. Today the building is used as a dwelling house.

What is the best accessible to the Scholz-Wolf House from: