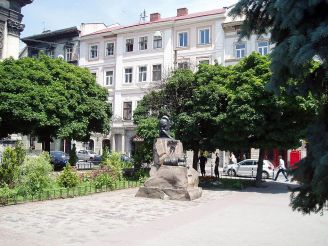 In the center of the historical part of Lviv sheltered one of the smallest squares of the city - the Ivan Horseshoe. This place is just off the central avenue of Liberty and no less famous theater street, but find it quite difficult, although you should definitely do it.

On the territory of the Maidan, the largest fair in embroidered shirts, accessories, decorative gift items, jewelry and household items, made ​​by hand by Ukrainian masters.

Several centuries ago, the square was just one building - Hospital of the Holy Spirit. Such also was the name of the Maidan in the 14-18 centuries.

But eternal buildings do not exist, and in 1780 the hospital in ruins, to make room for the Vienna coffee house and the guardhouse, which were built on the initiative of the Austrian authorities.

Attractive aroma of coffee is in the air, attracted a large number of citizens, and soon the territory Maidan was built up houses. Viennese coffee house on the square of the Holy Spirit gradually acquired the status of the recreation center of Lviv.

Today, the main attraction of the square is a monument to the fearless fighter for Ukrainian independence - Ivan Horseshoe . According to legend, the Cossack deceit captured and beheaded on the very spot where in 1982 a monument.

In the 21st century, nothing reminds of the terrible events of the past. Tucked away from the hustle and bustle of the area - it is a favorite place of citizens and guests. It is nice to relax, sitting on benches in the shade of a tree, and gain strength before visiting City Hall and numerous Kamenica, which are nearby.

What is the best accessible to the Ploshcha Ivana Pidkovy from: