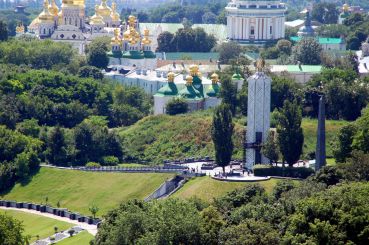 Holodomor victims Memorial teaches us to confront hatred and violation of human rights. The Memorial activity cultivates protection of human dignity and democratic values; works on preventing crime of genocide by raising tolerance and sense of moral responsibility among citizens against challenges to all standards of rights and freedoms.

The Memorial plays an important role in the civil education of the younger generation; creating awareness of the need to preserve the Ukrainian state, as one of the main defense against genocide.

An important task of the Holodomor victims Memorial is to remind of Ukrainian identity, which was tried to be replaced by the Soviet identity. Memorial is an intermediary in the transferring process of information and memories about Holodomor. It demonstrates сconnection between generations of Ukrainian nation and preserves the memory about attempt of its destruction.

Knowledges of the Holodomor history, which are given by the museum, raise issues of morality – cherishing of respect to the memory of Holodomor victims, compassion and rethinking of personal life positions, which is the highest value.

Even after the prohibition of the truth about Holodomor was canceled, disturbing denials of Ukrainian people genocide are continued. Categorical denials can be heard from the Russian Federation, which is to be called the legal successor of the USSR; which is a manifestation of disrespect to the memory of more than 7 million of innocent victims, to the feelings of Ukrainians who lost their relatives, to Ukrainians who survived the genocide, and to democratic rights and freedoms in whole. In fact a denial can cause a threat of genocide reiteration.

By speeding information about Holodomor, the Holodomor Victims Memorial draws attention to the issue of "famine terror" which is still in use in XXI century in different countries of the world.

What is the best accessible to the National Museum "Holodomor victims Memorial" from: