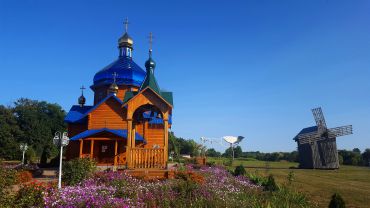 Scenic Poltava region is famous for its wildlife, cultural heritage and the fact that is the birthplace of the great writer Nikolai Gogol. The village Gogolevo, former Vasilevka, spent his childhood and adolescence Ukrainian genius, its formation as a creative personality. It was founded here museum-reserve Nikolai Gogol, whose opening was held in honor of the 175th anniversary of the birth of the writer.

The estate was destroyed by fire during the Second World War, so to restore it using photographs, plans, drawings, as close as possible to the original building. The museum-reserve recreated Gogol`s parents` house and an outbuilding with an office of the writer. The exhibition, housed in the rooms of the estate, tells the story of a creative writer and life path. Front of the museum there is a square in which the parents are buried Gogol. A natural decoration of the estate are two ponds where you can fish. Visitors will be pleased to walk through the magnificent garden, relax in the gazebo and sit down on a stone grotto to make a wish.
Mysterious and fascinating Gogol region is rich in attractions. Going on a trip, you should pay attention to the excellent local churches such as the Church of St. Nicholas in the famous Dikan`ka and Trinity Church .

What is the best accessible to the Reserve-museum of Nikolai Gogol from:

By Gogol places: Kyiv - Poltava
Let's go by Gogol places: from Kyiv to Poltava, then from Dykanka to Gogolevo and from Velyky Sorochyntsy to Myrhorod. That's a great journey to old ukrainian cities and small misterious villages.