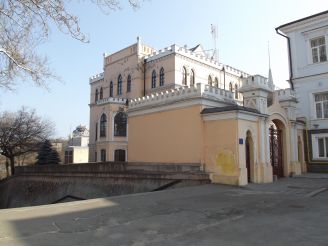 From the street Lanzheronovskoy guests and residents of Odessa offers magnificent views of the Palace of Witt. Built in the early 19th century for the key figure of Russian intelligence in the war of 1812 - Witt Ivan Osipovich, the palace has retained its picture kind to this day.

The exact date of construction is unfortunately unknown. Assumptions historians differ markedly - from 1830 to 1848. It is believed that the palace was built in several stages and was completed only after the death of Witt. Today we know the chief architect of the palace - Franz Boffo, who was able to skillfully combine several styles of architecture in the same building. In the description of the palace it is often pointed. The house was erected in the Gothic Revival style, as well as Big Ben , Tower Bridge and the Tower of Tom in Oxford. The building is painted in peach color, decorated with stucco reliefs and projections.

Historical building now occupies the Black Sea Shipping Company, the successor ROPIT (previously there were Russian society Shipping and Trade). Landmark is located in front of the Museum of Literature . Do not miss the opportunity to see and appreciate the Palace General, Shtirlitsa Napoleonic era.

What is the best accessible to the Vitt Palace from: