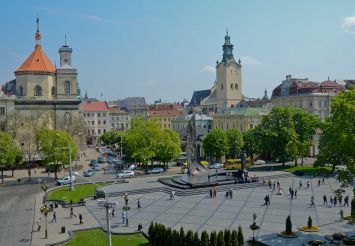 It is impossible to know the Lions, not walking up to the central street - Liberty Avenue. Its worth seeing if only because it hosts one of the main attractions not only Galicia, but also in Ukraine - Lviv Opera House . Yes, the same majestic architectural masterpiece in the spirit of the Vienna psevdorenessansa, which today is depicted on the Ukrainian banknotes valued at 20 USD. Tourists fashion - to be photographed on a background of theater and fountain in front of him with the twenty hands, choosing such a perspective to see both buildings : both on the banknote and the original.

On the south side of the 350-meter Liberty Avenue restricted area Mickiewicz - here is the original monument to this poet, genius of the Polish spirit. Nearby there is a fountain with a statue of the Mother of God . On the northern side of the border is the avenue street Gorodockaya beyond which begins prospect Vyacheslav Chornovil.
Liberty Avenue was renamed many times. Thus, from the late 18th century it was called the lower shafts, as there were fortifications. Then shafts apart, and the street was renamed several times, and she was Hetman, and street Legions at the Poles, and the street on May 1 at the Soviet power. During the Second World War, the German occupiers have renamed the place in the middle of the avenue in the area of ​​Hitler. Shortly after the victory of Soviet power did not come up with anything better than to give the name of Lenin Prospect. Present, through suffering, the name of Prospect received in 1990.
There are many beautiful old buildings Kamenica in different architectural styles, with a rich finish. In this pamphlet looks harmonious and enticing. Not to be missed, and the so-called "hundred-meter" - a pedestrian area near the monument to Shevchenko .

What is the best accessible to the Svobody Avenue in Lviv from: