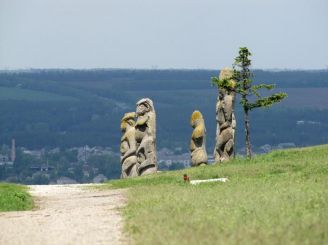 Kremenets mountain - the highest point in the Kharkiv region. Her height - 218 m above sea level. It is a place with a rich history, which keeps a lot of secrets and legends.

The origin of the name of mountain Kremenets not known, but there are two versions. The first - the mountain got its name due to deposits of silicon, not far from the hill is the quarry, which is very fond of visiting tourists. According to the second version, the name of this place closely associated with the history of the region. In the 14th century on top of the mountain was Tatar strengthening - "Kerman". The name seems to have been transformed into a consonant Russian word "Kremlin", "flint" and gave the name to the mountain Kremenets. After 300 years, this place was occupied by Russian patrols. Remains of fortifications can still be seen today.

Kremenets - it is an outstanding monument of history, which is the historical center of the city Raisins. Located closer to the top legendary stone statues that are the hallmark of this place. There is giving, that once lived here tribes, they worshiped the sun, but once his anger was kindled, they paid for it - the sun turned them into stone.

Mountain and kept the memory of the Great Patriotic War - on top of it is a memorial. Here you can see a lot of military equipment, as well as the memorial plates with the names of fallen soldiers.

Mountain Kremenets - a place where the past is closely linked to the present, where the mysteries of history are waiting for tourists at every turn.

What is the best accessible to the Mount Kremenets from: