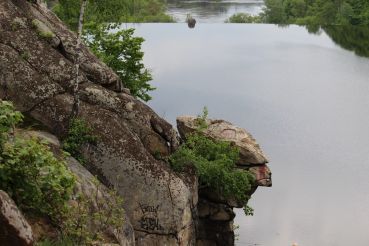 In Zhytomyr has a wonderful place. Of the arbor city park offers spectacular views of the canyon Zhytomyr . It river runs Grouse, washing granite coast with bizarre rocks, piled up in picturesque disorder. One of them, located on the left bank of the river, called "Head Chatsky." A rock on the right bank called "Four Brothers."

Why Chatsky head? There are several legends. The most famous tells the story of a brave warrior who, defending the city from the Horde, lured hundreds of enemies on top of granite boulders and pulled them behind them down to certain death. Chatsky horse finally struck the rock hoof, and it become like the head of a warrior. According to another version, the rock is named after T. Chatsky, founder of Kremenets Lyceum.

Rock "Head Chatsky" is considered a symbol of Zhytomyr and is one of the wonders of Ukraine.

What is the best accessible to the Chatzky's Head Rock from: