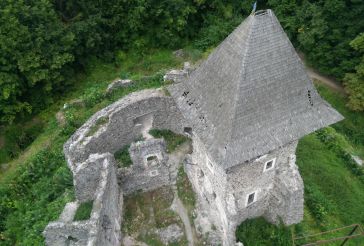 Near the village Nevytske in Transcarpathia, 12 km from Uzhgorod is a real fairytale castle fortress. He stands in the forest on a high mountain, which is bordered by a creek Wajda. Climbing up the serpentine, you can see the medieval castle, whose history begins in the 12th century. They owned Hungarian rulers. However, the century did not spare the majestic fortress, but here being restored, and the construction gets old greatness and power.

Fortifications of the castle include a wall with four towers, two shafts and a moat between them. From the castle walls offer a view of the green valley of the river Oh.
One of the oldest castles of Ukraine is covered by many legends. Previously it was called Castle or Castle Nevestskim brides. Rumored to its construction not even the Hungarian nobility and Russian princess. Allegedly the fortress was built to protect the bride. According to another version, in an impregnable fortress buried young girls from noble families. There is a legend about the Virgin trash that made mixed into the solution to strengthen the walls of the fortress eggs, breast milk, and even blood ...
At the foot of the hill where the castle, you can see a column of volcanic tuff, resembling genital organ - Nevitsky post. There is a legend that in pagan times came to him to worship a woman who wanted to have children.
Nevitsky castle can be visited free of charge.

What is the best accessible to the Nevytsky Castle from: