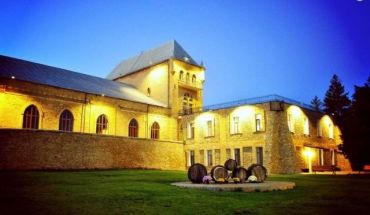 Fans of "wine tourism" have the opportunity to appreciate fine wines, which are made on the wineries of Prince PN Trubetskago. This enterprise was established in the late 19th century - that`s when the first vineyards were planted.

Prince Troubetzkoy has decided to develop the economy, on the recommendation of Lev Golitsyn, chief winemaker of the Crimea. Having built a winery, he started producing white and red wines. And achieved such success that the Paris World Exhibition best varieties won the "Grand Prix", and then, at home - Russian premium.

With the advent of the Soviet authorities wine cellars have not lost their purpose, however, the plant was given a new name - Lenin. The most difficult times, the company survived after the collapse of the USSR. However, in the early 21 th century at the winery, new investors, the company modernized. Now it specializes in producing wine for champagne factory. To visit with a guided tour in the company can be by appointment. Guests will spend in the historic building of the winery, antique galleries in wine cellars, and tasting rooms where offered to taste the noble drink. In addition, visitors can try yourself as a winemaker and wine produce with their own hands.

What is the best accessible to the Prince Trubetskoy Winery from: