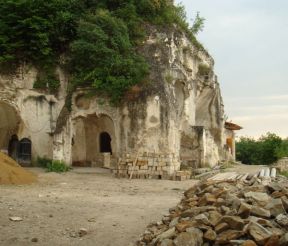 Not so long ago the Holy Useknovensky Lyadova rock monastery celebrated its 1000th anniversary. This is one of the major shrines of Ukraine - no wonder it is popularly called Podolsky Athos. On the high steep slopes of the Dniester monks built their monastery: holiness and namolennye these places creates a sense of another world, without vain earthly concerns.

The founder of the monastery of St. Anthony of the Caves is considered that in 1013, returning from the Greek Athos stopped here, struck incredible beauty. Later, near his cave, and the other monks settled. This settlement was the first Christian monastery in the area. For many centuries Lyadova monastery played an important role in the history of Ukraine. Not spared the abode of war, bring ruin and decay. But the biggest damage was done during the Soviet era, when in 1938 during the construction of fortifications, it was decided to blow up the monastery buildings. Were irretrievably lost ancient iconostasis, ancient books, unique icons.

The revival of the monastery began in 1998 with the arrival of monks from Pochaev Lavra , many shrines were rebuilt. Preserved cave church and the cell of St Anthony, St source from which he drank the water. Revered shrines of the monastery - ancient stone cross, the miraculous icon of the Holy Head of the Beheading of John the Baptist, the icon of the Mother of God "Joy and consolation." No less unique "rock Chronicle" - a collection of ancient inscriptions in different languages ​​on the outside of the Baptist Church.

For many pilgrims monastery built hotel, located in the village of Lyadova Vinnitsa region. The path leading to the monastery is a steep climb, but every effort will not be wasted. This holy place is charging all special energy, where with the help of the healing power of sacred places people receive God`s blessing.

What is the best accessible to the Liadova Rock Monastery from: