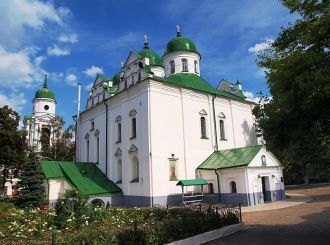 Holy Ascension Florovsky Nunnery, the oldest of the existing monasteries of Kiev, located at the foot of Mount Florovsky, at the hem. The exact date of foundation of the monastery is unknown, but there is evidence of its existence before the devastation of Kiev in 1482 Mengli Giray. The first documented reference dates back to 1566 and is found in the letter written by the Polish King Sigismund II Augustus Kievan prince Ostrog.

Numerous urban fires heavily damaged places of worship, but thanks to donations from parishioners and state aid they have been restored, and even built new temples. Over time, the monastery became an important center of education and culture. In the monastery school was opened for girls from poor families, hospice and hospital.

In the 17-18 centuries in the convent as a nun tonsured women belonging to noble birth. Among them was a schema-nun Nektarios (Princess Dolgorukaya), abbess Kallisfeniya (Princess Myloslavska), August (Countess Apraksina) and others.

At the monastery, near the ancient temples, broken beautiful garden with fruit trees, magnolias, rose garden. All together creates a vivid picture, similar to the biblical garden. In the monastery, do not go to "summer time". The nuns are old monastic form. Communion bread, Easter cakes and traditional monastic meal prepared on wood.

In the monastery incessantly read the Psalter. This is a special kind of prayer, reading it happens around the clock without interruption. Prayer for the living and the dead in reading incessantly Psalter has unprecedented power.

What is the best accessible to the Holy Ascension Monastery Florovsky from: