House of Scientists in Odesa 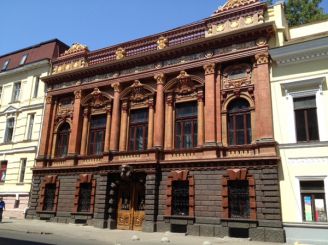 This stately mansion - a palace with beautiful rooms, immersed in luxury. It is not surprising that it is here filming the legendary film "The Three Musketeers", giving the beauty of the royal House of Scientists of the Louvre.

The building, erected in 1832 in the style of Russian classicism, has long been the property of the famous Odessa patron Mikhail Tolstoy. That he has invested heavily in a magnificent Opera House. His mansion (now the House of Scientists) was the first building of Odessa, where had the first telephone line. So the graph can enjoy opera, without leaving home.

With the coming to power of the Bolsheviks, the house became the first national museum. Then the lovely rooms transmitted first in Ukraine House of scientists. During World War II buildings miraculously managed to escape the Germans, leaving the city, planned to blow them up, but mines defused in time.

Today, architectural complex includes two buildings: the Count`s Palace and the former art gallery (Green Hall), made ​​in the Baroque style. The interior of the mansion and is now shaking its refinement. Oak, Walnut, Silk living rooms, from which it is impossible to tear your eyes, now open to the visits. The second floor has a brilliant white hall paved with oak parquet. He still retains the imprint of the era prim grand receptions. In the Red Hall is a museum House of Scientists.

The marble living room, dining room that served as the count is kept one of the most valuable exhibits - old piano, valued at 500,000 euros. He played his own famous composer Franz Liszt. Not surprisingly, the House of Scientists - located in major exhibitions, symposia and seminars.

What is the best accessible to the House of Scientists in Odesa from: