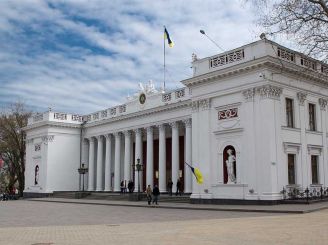 Once in Odessa for the first time, you will want to see one of the main attractions of the city - the seaside boulevard . Walking through its shady avenues, be sure to leave to the elegant white building, decorated with monumental columns. This architectural masterpiece - the building of the Odessa City Council.

Decoration of the main entrance are stylish English clock with sculptures of "Night and Day". Twice a day they give birth manually. Hours delight visitors Duma area every half an hour playing the famous melody that Odessites believe anthem of the city. Sculptural group with a clock complement chiseled sculptures Tsetsery and Mercury, the left and right of the white columns.

By the way, in front of the city hall, you will see the monument to Alexander Pushkin, framed by fountains. Here originates a street named in his honor.

Next to the white stone building is a gun - a trophy, inherited from the English frigate "Tiger". From the 19th century it was shot in the city. But the most beloved monument guests, located near City Hall - index of the cities where you can find the distance from the building of the City Council to many cities in the world.

What is the best accessible to the Odesa City Hall from: