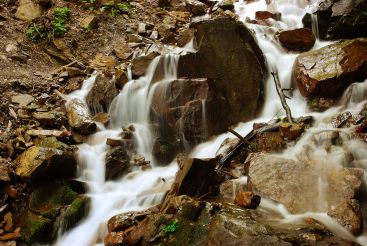 In Ukraine, there are lots of attractive places for tourists. For example, Transcarpathia is considered a tourist pearl of the country. In a small area contains unique natural "jewels". One of these is a waterfall Trufanets.

Trufanets Falls - the highest natural waterfall in Transcarpathia. The waterfall is called the eponymous tributary of the river, which is fed from the cold waters. Its origin Trufanets takes altitude 1720 meters above sea level at the foot of the mountain Bliznitsa. Then, making the hard way, which is partially underground passes, overcoming numerous rapids, water rushes down. The waterfall reaches 36 meters. Crystal clear water with a mighty noise hits the rocks below. Around the waterfall formed a thick cloud of tiny water droplets.

The beauty of this waterfall in the fact that it is formed of several stages. Downdrafts, choir singers, sing a hymn force of nature. It is necessary to stop and listen to this amazing song. To fully enjoy the beauty and power of the falls and close established a comfortable gazebo.

Waterfall Trufanets, unlike some other "jewels" of the Carpathians, is not hidden from the eyes of tourists. The waterfall is located near the village of Yassin. You can also take a walk from the village of kvass.

What is the best accessible to the Waterfall Trufanets from: