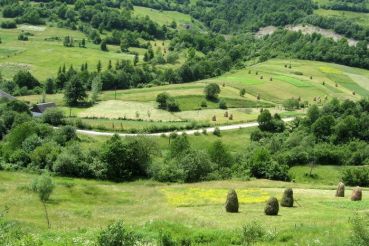 Uzhoksky Pass is considered one of the most beautiful places in the Ukrainian Carpathians. But this area attracts tourists not only for its beauty. Now it is hard to imagine that in this quiet and peaceful place once the events unfolded on the history of the country.

If the earth could talk - she would tell a lot. The fact that here in the days of the First World were fierce battles reminiscent of a nearby military cemetery. These lands were trying to assign and Austro-Hungarian troops, but could not keep them under pressure from the Russian army. Held here and the Polish-Hungarian border, and the Polish-Czechoslovak.

Hard to imagine that these quiet lands were once poryty trenches and trenches. During the Second World it was so. There were 30 concrete and 60 wooden and earthen bunkers. Today it is a place where there are so breathe freely, is the boundary of two regions - Lviv and Zakarpattia. This is a tacit reminder that people need to find a peaceful solution to their problems.

What is the best accessible to the Uzhok Pass from: