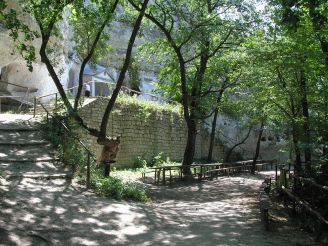 The monastery - an ancient attraction cave structures and the spread of Christianity in Podillya. And the surrounding nature and the Dniester River Canyon create a beautiful landscape that attracts tourists.

The history of the monastery

According to historical memories monastery in Bakota was founded in the mid-12th century. The facility was large in size and is located in a rock on two levels. The church was painted in fresco. She had three caves that were monastic cells, and then used for burials. In the early 15th century, the monastery fell into disrepair, which was associated with the Polish-Lithuanian war on the tail. It was destroyed and never rebuilt.

Explore monastery in Bakota first started scientist Vladimir Antonovich in 1884. On top of the mountain he explored the cave, which is brought to keliyam. Also, human burials and cave were found. It found many curiosities: the decoration, the monks things, weapons and ammunition soldiers. They were handed over to the potter skirts diocese. But during the Soviet era relics were destroyed.

In 1893 there was built a retaining wall and wooden coverings, set the Altar. So we set up a church and consecrated it. But it was destroyed in 1960.

At the end of the 20th century there was built a shed, which was used as an altar. Now this place of worship are held periodically in the open air.

The cave monastery is located on the banks of the Dniester reservoir on a site measuring 40 by 10 meters. Caves are recessed into the interior of the mountain by 7-9 meters. Basic facilities - this caves and niches, which are placed on two levels, connected by a wooden extension. In the floor of most caves cut down 19 tombs.

On the wall of the monastery, there are two ancient inscriptions. And here are three sources of water, which the locals call healing.

How to get to the cave monastery

The monastery is located on the territory of Khmelnitsky region, in the former village Bakota, 3 km from the village Goraevka .

It is easily accessible from Kamenetz-Podolsk. Simply use by buses that ply in the village of Staraya Ushitsa . And then in the monastery need to walk along a country road.

It is more convenient to use the car. It is necessary to go on the E50 highway in Khmelnitsky , and then turn on the road H03 and move to a monastery.

What is the best accessible to the Rock-cave monastery Bakota from: