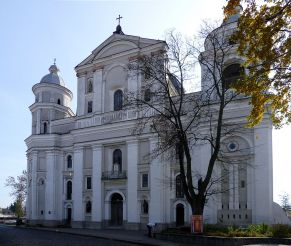 The history of one of the Catholic churches of Lutsk dates back four centuries. Its medieval walls drenched atmosphere of antiquity and kept many secrets that are left Jesuit monks. Once inside the church, a man carries like in the old days.

Cathedral of the Holy Apostles Peter and Paul, was an integral part of the defense system of Lutsk. Therefore, he had grown a massive towers with battlements. Surprisingly, the powerful, imposing walls hid three underground floors, which made ​​it possible to safely survive any attack and siege.

This place - one of the most mysterious of all Lutsk, attracts thrill-seekers. Gloomy vaults, tombs, filled with water, human remains - bones, skulls ... Historians have not yet found an answer, who were killed under the arches of the church. In the cave were conducted numerous excavations, the light of God removed the furniture, utensils and other household items medieval. Visit the mysterious passages can book excursions.

The cathedral is one of the most important Catholic shrines Volyn. Near it is bell tower, a well-preserved since the 16th century. Interesting and the interior of the ancient church, decorated with stucco, sculptures and paintings. It is dominated by the traditional authority that creates a special atmosphere in the cathedral. Today church is an active Catholic church.

What is the best accessible to the Peter and Paul Church from: