Historical and Ethnographic museum of Olbracht 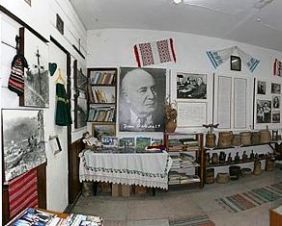 Historical and Ethnographic Museum of Ivan Olbrakht devoted the life and works of the famous Czech writer. The museum was opened in the village Kolochava where long lived and worked Olbracht. Here he collected materials for his novel "Nikola Shugay - a robber." Over time, this Transcarpathian village has become a place of pilgrimage for fans of the writer`s work.

The exposition of the museum consists of two sections. The first is devoted I. Olbrakht. In the second, ethnographic, you can see the patterns of women`s and men`s clothing, and household items Transcarpathia period 19-20 century.

Ethnographic museum exposition helps to better understand the time when he lived the last opryshek Carpathians Shugay Nicholas, who was killed in 1921 for a cash consideration, the Czechoslovak government promised. In this picturesque area in the years 1933-1934 I. Olbracht (together with film director Vladislav Vančura) made a film "Marika-nevernitsa" which showed in all colors and everyday life verhovintsev, Jews and Czechs.

Due to the active creativity Olbrakht Ivan, who spoke about Kolochava and its inhabitants contemporaries, the legend of kolochavskom Opryshko still alive and attracts large number of tourists.

What is the best accessible to the Historical and Ethnographic museum of Olbracht from: