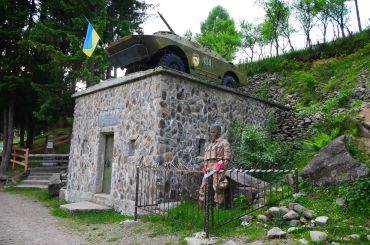 Kolochava village in Mizhgirya area is considered to be unique in Ukraine. This is one of the most ecologically clean places of Transcarpathia, part of the reserve "Sinevir" . There are 20 sites, some of which are completely original, such as a monument to "a teacher from Vkrayiny" or monument zarobitchane .

In the village there are 10 museums, including the Museum kolochavskim memorial to soldiers-internationalists. Men from Kolochava participated in military operations in 9 countries around the world, including one member of the conflict on the Sino-Soviet. The museum has numerous military weapons and army kolochavtsev photos and sound army songs. On the ceiling stretched canopy. Ticket to the museum soldiers-internationalists also valid for visits to the museum " Arpad Line . "

What is the best accessible to the Memorial Museum kolochavskim soldiers-internationalists from: