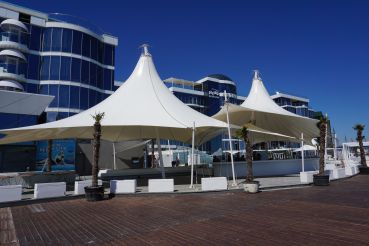 Beach "Langeron" in Odessa was named in honor of the French military leader and governor-general of the surrounding land, lived in the city from 1815 to 1822 years. He made ​​a great contribution to the development of the region, from the time of his reign were built dozens of residential areas, debugged modern infrastructure (building bridges over ditches, upgrading wilderness coast, and so on. D.). Took a fancy to the beautiful coast a few kilometers from the city, Alexander Langeron ordered to build a holiday home. A cozy piece of coast planted gardens made of stone supply water, built a large estate on which Pushkin visited during his exile. By the early 20th century from the magnificent beauty of the estate were only ceremonial arches. They can see in the photo archive of the city, which have been preserved on postcards.

Today, the beach "Langeron" remains one of the most picturesque places of Odessa. Beautiful water surface smoothly into the dense foliage and low coastal rocks. On the beach a variety of restaurants, nightclubs, shops and hotel complexes. Nearby is worth visiting the adjacent Alexander Park, where the first tree planted by the Emperor Alexander II, later established here a monument in honor of the famous event.

What is the best accessible to the Langeron beach from: