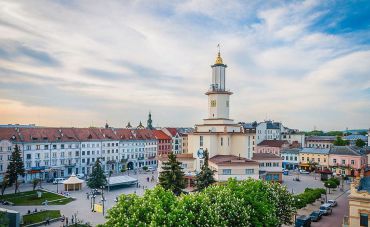 In the Middle Ages the main city square called corny - market. Ivano-Frankivsk was no exception. Here, in a strange symbiosis monuments blend with the original Kneipp. And it looks like this, by the way, quite naturally.

Cities have received Magdeburg Law were to be in the center of the square area, which is usually called the market. On all sides densely built up area of ​​two- and three-storey houses with three windows wide. Numbering of houses started at one corner and continued around the perimeter. It is in the Market Square began restructuring the city, which was called Stanislav.

Every year, the central square of the fair took place. They lasted about 4 weeks and begins on May 7, September 8 and 28 November. To trade was fair, several times a week checking the weight of the people authorized sellers. If everything was in order, then we put a special stamp. If the stigma is absent - trade stopped.

An essential attribute of the area was the town hall.

Some facts about the Town Hall in the Market Square in Ivano-Frankovsk:

Before the south wall of the town hall was a sculpture made of tin - a Jew holding a bread with the inscription: "A penny". These authors wanted to show how cheap bread used to cost.

Holidays in the area

Earlier in the Market Square was seething cultural, economic and political life. Now it`s just a cultural center of Ivano-Frankivsk - are held here all sorts of festivals, concerts and exhibitions.

How to get to the main square of Ivano-Frankivsk

Market Square is located in the center, so you can reach it from any corner of the city. From the railway station you can use the shuttle bus number 22, followed by a few minutes walk.

What is the best accessible to the Market Square from: