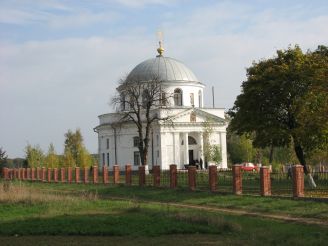 In the Ukrainian village Dykanka, located on the banks of the river Vorskla Poltava region is the ancient Church of St. Nicholas. It was built in 1794 in the neoclassical style. The project has developed a church known Russian architect Nikolai Lvov. During the construction of this temple was first used, the double dome, which greatly improved the quality of the acoustics of the temple and contributed most of the coverage of the church.

Go inside the church. Here you will see the extant iconostasis. It is made of bog oak in 1852. Affects skill Ukrainian serfs whose hands it was created. Gorgeous wood carving resembling finest lace, framed icons.

Note the space between the domes on the third floor. Get to this place, you can narrow spiral staircase, which surround a beautiful painting made on biblical themes. On the drum of the dome are invisible inside the window openings, through which the sunlight falls directly into the hall.

Still not solved design "air furnaces", which are located between the first and second floor of the church. They are like modern air conditioners not only warmed the room, but also maintained a constant level of humidity.

After 1917, the share of Nicholas church took many tests. In the thirties of the last century, around the entire forest was cut down, broken fence, which consisted of stone pillars with heavy iron chains, dismantled street, paved with stone slabs especially for religious processions. During the Civil War were desecrated princely burial and treasure under crypt looted. In 1963 indoor Nicholas Church was organized by a museum of atheism, and the church itself was moved to the state museum of local lore. In the years gone a lot of unique icons, candlesticks, crosses and precious ancient books. However, in 1989 the church was again opened its doors to parishioners. In the cellars beneath the temple is an ancient tomb Princes Kochubeev, built in the years 1810-1827, it buried eight members of this ancient race.

Also attracted the attention of ancient oaks Kochubeevsky whose age is more than eight hundred years. Trees planted at the entrance to the former princely estate.

Getting to St. Nicholas Church can be on a bus that goes from the bus station to the town of Poltava Dykanka.

What is the best accessible to the Nicholas Church in Dikanka from: