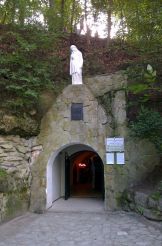 Near the village Stradch is one of the main Ukrainian Greek Catholic shrines - Stradchanskaya cave. This grotto, made in ancient times, was the abode of monks. According to ancient legend, the cave monastery was founded in the 11th century. During the Mongol-Tatar invasion, residents of the villages took refuge in these caves. Once Tatars found the secret entrance to the cave. In anger, they lit fires, and all the people inside the caves, were killed. The monks prayed for the salvation of the souls of innocent people. Say, the Mother of God was heard requests and to protect the people. After many centuries this place has not lost its special atmosphere here feel the presence of the Mother of God.

In memory of these tragic events in the 15th century was founded here Stradchanskaya Pechersk Lavra. Her main shrine has become the icon of the Mother of God Stradetskoy Indestructible. Unfortunately, survived only a copy of it. In the 16th century the monastery was called Stradetsky Basilian.

In 1936, Mount Stradetskoy laid Way of the Cross, which is surrounded by magnificent nature Yavoriv National Park. Here is a small cave, she, like the hill on which stands the church, called the Church. The cave is a horizontal rectangular recess. Height grottoes little over 2 meters. One of them has a cylinder set, the second - a more rounded, with a diameter of 3 meters. Bi-directional stretch of caves cave galleries. They sort of natural underground labyrinths is expanding, the narrow, leaving little space for movement. Visitors usually allowed only in the near cave temple, so how to get on really hard.

When you go on a tour of the cave, grab a flashlight or other portable lighting device. After visiting the cave, you can stroll through the beautifully landscaped park next to it.

Stradch village is near the road Lviv-Sycamores. Here you can see pointers that define the route to the cave. From the city to the village can be reached by taxis and regular buses, but much easier to get to this object by car.

What is the best accessible to the Stradchanskaya cave from: