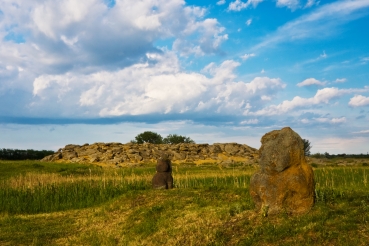 Welcome to highlands in the centre of boundless plain! The Kam’iana Mohyla History and Archeology Reserve is located in the Molochna River valley. From far away it looks like a yellow island made of big boulders of 12 meters high.

Millions years ago this place used to be the bottom of the Sarmatian Sea. Years and centuries passed by… the sea turned into a desert. Melting of glaciers caused gullies of different sizes. This is the way an island was created, which later turned into a hill. Under the impact of water, sun and air this hill has been split into thousands of boulders creating different caves and grottos. For centuries these caves used to be a temple for different tribes, where they worshipped their gods, performed rites. Archeological excavations, altars and rock paintings found there prove it! Scientists assert that these rock paintings are dating back to the Stone Age, the Late Paleolithic, the Bronze Age and the Middle Ages. You’ll see paintings of mammoths and primitives in Chakluna Cave located in this reserve. Koza Cave will be interesting for you with its rock paintings of different animals such as elks, ducks and goats. These rock paintings represent primitive hunting and domestication of animals. The most interesting are paintings in Misteriy Cave, where mammoths, horses, rhinoceroses and dancing women in masks of animals next to them are depict. Such pictures give us an idea of ancient rites. Those people of thousand years ago believed these rites were to protect their homes from misfortunes and troubles as well as rites for successful hunting.

The Kam’iana Mohyla History and Archeology Reserve has become a real centre of archeology and history of Zaporizhzhia city. Annual expeditions of the reserve discover numerous historical sites of ancient culture. This place is unique due to the fact the most ancient written language on the Earth was discovered there. It is known as Proto-Sumerian language.

The exhibits of ancient times you can see in the Museum “Pervisne Mystetstvo Kam’ianoi Mohyly”, which is located on the territory of the reserve. It’s worth seeing its displays: implements, mammoth’s tooth, weapon of the Mesolithic, ware of the Stone Age and pieces of petroglyphs. It’s very interesting to see “churyngy” – sacred items used to protect tribes and their generation from illnesses and evil.

Do you want to feel history of ancient times? Go to Gostra Mountain. Dating back to 1992 a graven stone was found there. Scientists deciphered this inscription and got to know, that place was used as an altar of Ares, the Scythians’ god.

Every mysterious place can reveal its own captivating secrets and stories to you. According to one of legends, Kam’iana Mohyla appeared on the place of fierce fighting of ancient heroes, when they threw boulders at each other. A legend about stone images located on the territory of reserve is interesting as well. According to chronicles, 1223 was a year of a great battle between the Polovtsians and the Russians. Many great warriors and princes died. After battle mothers, wives, sisters and daughters went to search for victims bodies to bury them. Death reigned on that field, so women couldn’t stand that any longer and turned into stone images…

Today Museum-Reserve is very popular with tourists not only from Ukraine, but also from other countries. If you are curious person or you are fond of ancient history, then you are well advised to visit these interesting sites and feel its powerful energy. Incomparable smells of steppe grass will give you pleasant feelings.

What is the best accessible to the The Kam’iana Mohyla History and Archeology Reserve from: