The Quay in Dnipropetrovsk 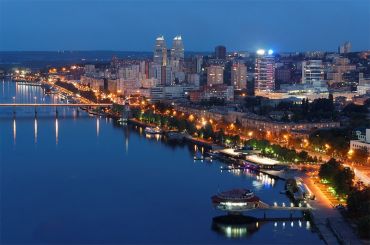 Today it is hard to imagine Dnipropetrovsk without its magnificent Quay, which is a favourite walking place of locals and city guests. This wide quay of 30 km long with a green boulevard in the middle is located along the Dnipro River and is considered to be one of the main attractions of Dnipropetrovsk.

The Quay’s construction started in the 1950s, before that it wasn’t equipped. In 2005–2007 it was completely reconstructed: asphalt was replaced by new paving slabs, the traffic area was repaired, and new modern lighting was installed. The city Quay is considered to be one of the longest in Europe, and for its beautification it could compete with European quays.

Walking along the Quay your attention will be attracted by a huge number of plants and flowers. On the territory of two and a half thousand square meters there are more than seven thousand chrysanthemums of eight varieties, about forty species of trees, including thuja of spherical and pyramidal shape, pine and juniper that are quite rare for this region.

No doubts, you’ll find a favourite place of yours at the Quay. In its central part you might notice two terraces separating upper and lower pedestrian zones.

One of Quay’s main attractions is the White Swan, a music fountain built on the river opposite the Dnipropetrovsk hotel. Abstract compositions and specific figures are achieved by employing modern technologies of laser sputtering. The fountain rotates and really reminds a swan flapping its wings, and jets of water rise up to the height of more than fifty meters.

Near the pedestrian bridge to Monastyrs’kyi Island you can find the Bench of Lovers and the Happy Tree made by local blacksmiths as a present to citizens at the City Day.

You will also see Dnipropetrovsk Circus located on 33 Naberezhna Lenina Street. It was designed by Pavlo Nirinberg and is one of city attractions. The building is made of shiny metal and illuminated so you might feel yourself as in a fairy tale.

Right and left banks of the river are connected by five bridges, and the most beautiful of them is Merefo-Khersonskyi Bridge. Near the Central Bridge there is a sculpture “Youth of the Dnipro” built in 2005.

St Nicholas Church on Monastyrskyi Island is visible from different points of the Quay. This beautiful white church with golden cupolas has become one of the symbols of Dnipropetrovsk.

What is the best accessible to the The Quay in Dnipropetrovsk from: