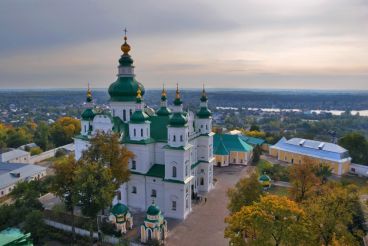 In the western part of Chernihiv on the Boldyni Mountains there is a unique creation of the 18th century – Holy Trinity Cathedral. An unusual shape of the temple attracts many tourists, and its miraculous shrines attract pilgrims from all over Ukraine, Belarus and Russia.

Trinity Cathedral was built in 1679 according to the plan of Archbishop Lazar Baranovych. In 1688 Ukrainian hetman Ivan Mazepa financed the construction, so it was resumed. Trinity Cathedral was designed by architect Ioann Baptist from Vilnius in the early Classical style and “Hetman Baroque”. In 1695 the temple was consecrated by Archbishop Feodosiy Uglyts’kyi from Chernihiv, a Lazar Baranovych’ successor.

The basis of Holy Trinity Cathedral is a cross-domed church. Two towers are mounted on both sides of the west façade of Orthodox Church – that is typical for Catholic cathedrals; in addition you might notice other features of typical western churches, such as three naves, three apses, six columns and a transept. Trinity Cathedral’s design is similar to Old Russian stone buildings; however you can notice influence of Polish and Lithuanian Baroque. Temple walls are decorated with niches. Above cross-shaped, rectangular and arched windows you’ll see triangular and half circular cornices. Trinity Cathedral is a seven-headed church with a towering belfry. Oversupply of decorations, contrast and dynamism create a truly solemn atmosphere in Baroque style.

In the 17th century the temple’s interior was designed using paintings of various biblical scenes. However the building has suffered damage caused by two fires and only central dome has been saved. In the 20th century the interior of the temple was returned to its original form.

You’re well advised to visit the basement of the cathedral, where relics of St Feodosiy Uglyts’kyi, St Lawrence, as well as relics of saints from Pechers’k Monastery are kept. Directly under the floor there is a burial crypt, which used to be a burial place for feudal lords C18th-20th.

Next to the cathedral you will notice two chapels and a refectory, as well as Religious school, where future regent-psalmists are taught.

Presently Holy Trinity Cathedral is a place, where a miraculous icon of Our Lady Good Friday written in 1903 on Athos Mount is kept. Pilgrims from all over Ukraine come to this icon with the most intimate prayers. They say it protects and heals the most severe diseases.

Every day interesting excursions are arranged at Holy Trinity Cathedral. Obligatory part of the tourism program is to climb the highest tower of the church – a belfry, which was built in the 18th century by Rastrelli, the architect of the Winter Palace in St Petersburg. Overcoming one hundred seventy-two stairs of the Trinity belfry, you will be able to enjoy beautiful bird’s-eye views of Chernihiv overlooking golden domes of its churches.

Holy Trinity Cathedral is the main temple of Chernihiv. If you take a look at the gable of the building, you’ll notice a crown placed there.

The cathedral is located on 92 Lev Tolstoy Street, where you can get by taxi bus number 30, 7, 9 and 36. You should get out at the crossroad of Muzychna and Lev Tolstoy Streets. You can visit St Illya Monastery located near Holy Trinity Cathedral.

What is the best accessible to the Trinity Church from: