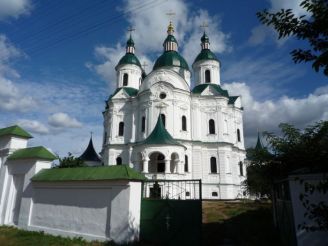 Old Cathedral of the Nativity of the Blessed Virgin Mary is located in a small town in the Chernihiv region Kozelec. Temple is recognized as one of the best Ukrainian shrines erected in the Baroque era. Kozeletskiy Cathedral is considered a unique representative of the temple architecture of the 18th century.

The magnificent temple was built in the years 1752-1763 by order of Countess Natalia Razumovsky, and it still amazes visitors with its lush decor and uncharacteristic for a provincial town in size and rich decoration.

All visitors have the opportunity to admire a precious decoration of the cathedral - its iconostasis. According to some historians, the iconostasis was made in Italy and was intended for the Cathedral of St. Petersburg Smolny Convent. However, after making it turned out that he was great for the Smolny Institute and at the behest of the Empress was donated Kozeletska cathedral. Height iconostasis is twenty seven meters and magnificent paintings for his decorations were executed talented Ukrainian artist Gregory Stetcenko. Impress not only the huge size, but also a unique and highly artistic carving amazing painting this masterpiece.

Cathedral crown five domes on high drums. The basis of the construction of this temple is laid Ukrainian devyatikamernogo equilateral Greek cross, between the ends of which are provided for additional space, reinforcing the enormity of the structure.

During the long years of the share of the cathedral had many trials. Within its walls housed stables, a POW camp and even storage for fruits and vegetables. But thanks to the effort of many people and painstaking work of restorers cathedral was restored and beamed former beauty.

Temple is divided into two parts: upper and lower. The upper part of the cathedral was named in honor of the Nativity of Our Lady. The lower church lit in honor of the martyrs Adrian and Natalia.

According to an ancient legend in clear and sunny weather from the bell tower, which is located next to the temple, at the same time you can see the Chernigov and Kiev. Architecture belfry surprises with its originality. Particularly interesting concave facade walls resembling the appearance of the Trinity Cathedral in Chernigov. Climb the bell tower is possible only with the agreement of the cathedral.

Cathedral of the Nativity of the Blessed Virgin Mary is in the village Kozelets in Komsomolskaya Street, 4. Reach to Kozelets very easy because it is located right on the highway "Kyiv-Chernihiv." Of the two metropolises here regularly scheduled buses and taxis.

What is the best accessible to the Nativity of Virgin Mary Church from: