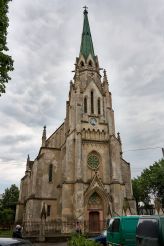 Church and monastery complex was built in the late 19th century. His erection missionaries petitioned the Society of Jesus - the heirs of the Jesuits. The project of the temple in the best traditions of European Gothic developed Director Chernivtsi higher real school professor Lyaytsner. They built a church on the donations of the faithful.

In Soviet times, it housed the archive, and in a Catholic convent - College of Arts.

The temple was revived in 2010 - he was returned to the Roman Catholic community of the church. Today the church is being renovated.

What is the best accessible to the Jesuit Сhurch in Chernivtsi from: