Cathedral of the Holy Spirit, Chernivtsi 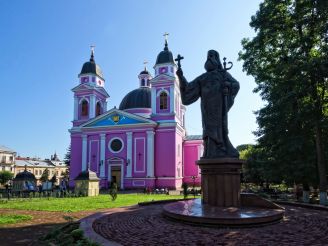 Highlight of Chernivtsi is considered the Cathedral of the Holy Spirit, designed in the classical style designed by the famous Austrian architect role. Cathedral impresses with its forms and grandeur despite his relatively young age - about 150 years.

The history of the Cathedral of the Holy Spirit

The cathedral was built on the order of Bukovina Orthodox Foundation with the active support of the first Orthodox Metropolitan Eugene Gakman edge. Laying the cornerstone took place on July 3, 1844 with the blessing of the Holy Father. Construction lasted for long 20 years and ended in 1864. Consecrated the church is the same metropolitan Eugene Hakman.

Particular attention is paid over the names of people who built the temple. The authors of the project were prominent Austrian architect engineer marginal role and Bukovina Marina. Before the creation of the building also contributed Josef Hlavka, the project which was rebuilt facade and bell tower in 1869. Incidentally, J. Glavka became the designer residence of Bukovina metropolitans and the Armenian Church in Chernivtsi.

In the period from 1892 to 1896 years of Viennese group of artists led by Charles Yobstom worked on the painting of the Cathedral of the Holy Spirit. The result of their work perfectly preserved to this day.

Last reconstruction carried out in the second half of the 20th century. In the 70 years of church converted to an art museum , but in 1989 again converted to the needs of the Orthodox Church as it is to this day.

What to see in

The temple is made in the classical style. It is a cross-domed church with three naves, from the front side there are two towers bell tower. Visiting the Cathedral of the Holy Spirit must close look at the murals inside, which are made in the spirit of academic Viennese masters.

How to get to the cathedral

The cathedral is located at the intersection of the main streets O. Kobylianska and Main, in the heart of the city. By Chernivtsi easily accessible by train from Kyiv , Lviv , Odessa or own transport.

What is the best accessible to the Cathedral of the Holy Spirit from: