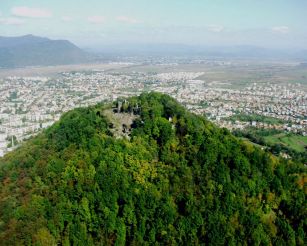 Through the top of the mountain ridges of the Carpathian passes the road that leads to the gate of the same name Hust castle. Historical information is not kept its date of construction, but some historians believe that it was founded in 11-12 century to strengthen the borders of the Hungarian state, as well as control the salt road.

The first mention of the castle date back to 1191 Khust year. Voivod named Hoost was the first owner of the castle. Castle lasted long. In 1241 he was approached by a horde of Batu and already in 1242 the castle was completely ruined by the Tatars. His recovery took a long time, and it lasted a long time, up to 1594. The castle defended the local population from the raids and know Ghirei`s. From the south-east side of the entrance to the gates of the tower was protected, which played a fateful role in the history of the castle. The tower was a powder magazine garrison. During a thunderstorm, 1766 lightning struck the tower and caused a terrible explosion that destroyed the castle. After that, numerous attempts to restore, but later it was decided to withdraw the garrison in Mukachevo Castle .

A distinctive feature of the castle was Hustkogo vault legend of Count Dracula, who is related to the Knight family Drago. The real facts in the legends of the castle is a well and an underground passage, the creation of which took builders a little over 9 years. Well served independent water supply in case of siege. By the time we were only ruins the Powder Tower and outside the castle gates, perimeter walls and bastions. You can also go up to the terrace to see the beauty of the valley where the river Tisza. Ruins are located in a beautiful park "Hust castle" .

What is the best accessible to the Ruins of Khust Castle from: