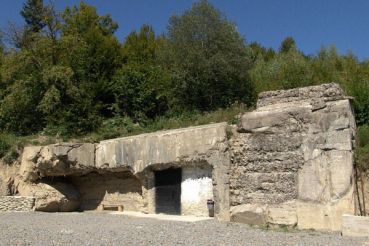 Carpathian Mountains are famous not only an abundance of scenic spots and monuments. In these parts there are military facilities as a reminder of the harsh times. In particular, in the Eastern Carpathians (over the village of Upper Grabownica) is a bunker fortifications` lines Arpad. " For those who like to wander through the military-historical sites in the spirit of Odessa catacombs - a place of special interest.

This bunker was dug to a depth of about 100 meters by Hungarian soldiers under the leadership of Germany. It is worth noting that the shelter turned out to fame: concrete walls with rebar as thick as a thumb, a lot of buildings with massive steel doors and a length of 300 km of tunnels on the territory of the Carpathians (in general, the length of the fortification consists of about 750 km). In wartime, the bunker was used as a military hospital, storage products and storage of ammunition, and other needs. After the war, the brave workers of the NKVD, the fear of occurrence in these parts based units UPA (by detonation or pouring concrete) destroyed many discovered caves and bunkers. However, this fate was avoided bunker `lines Arpad. " Today it is one of the largest military installations, surviving.

Tourists, historians and those interested in military history should come to the village Polyana Svalyava district, Transcarpathian region. At 8 km from the village is the village of Upper Grabownica, driving to the center of which, you need to turn right and after a few meters of the entrance to the bunker will appear. Today, there you can get both independently and with a guide. However, for the interesting story you need to pay a little extra.

What is the best accessible to the Bunker lines Arpad from: