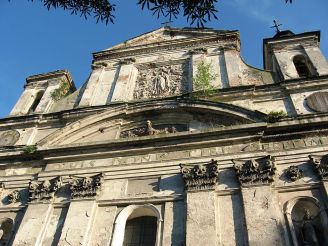 Grand church in the village of Olyka built in the Baroque style, is striking in its grandeur and power. This building, erected in 1635, it became a kind of copy of the Roman Church Church of the Gesù. The work was directed by famous Italian architects. Novovozvedennoe building immediately gained fame most beautiful buildings Volyn.

On the facade of the church housed statues of saints - St. Paul, Peter, Wojciech, Stanislaus. Figures of the twelve apostles rose above the pilasters. Inside the shrine was richly decorated with stucco. The basic material for decoration of the temple served as alabaster and marble. Art gallery dedicated to religious subjects, was the pride of the temple. But up to now, unfortunately, not all survived.

Already one year after the construction of the church was ranked collegiate. Soon there founded the theological school and academy, which operated almost to the Second World War. Then the Soviet authorities closed the temple, and about half a century, he was left to himself, and older than gradually destroyed.

Today the magnificent building has regained its owners - are settled Catholic parish. Within the walls of the old church during religious festivals prayer services and masses. Behind the temple is the bell tower, consisting of five pylons, which are connected by arches. The reconstruction of the temple.

By the way, not far from the church there is another local landmark - Olyka Castle .

What is the best accessible to the Trinity Church from: