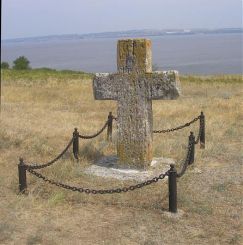 I think that in Ukraine there is no citizen who would not know about Zaporizhzhya Sich. Unfortunately, few people know that there were several Sich, and today we will talk about one of them - Kamensky.

If you operate modern concepts, the Kamyanskiy January was an administrative and military center of the Ukrainian Cossacks. It is located at the mouth of the Kamenka River, which flows into the Dnieper. Today this place near the village of Republican that in Kherson.

Founded in January that in 1709 after the destruction of Empire troops Chortomlyk Sich. From here came the Cossacks led by the ataman Kost Gordienko after the Battle of Poltava. It is important to know that Kamyanskiy January was under the protection of the Turkish sultan, so it gave some assurance that the imperial troops will not attack the Cossacks.

It`s no secret that Peter sought to destroy all Ukrainian Cossacks. So in 1711 he sends some of his January hetman regiments and regiments subordinated Ivan Skoropadsky. Kamensky Cossacks were forced to retreat to the borders of contemporary Crimean Khanate and found there a new January - Oleshkivski.

Three years after the death of Peter I in 1728, the Cossacks returned to Sich Kamyansko. Excavations have shown that small craft in January suburbs. Here Cossacks were engaged in pottery, non-ferrous metals. Also on the same territory was a church of Our Lady were also various workshops, booths, ham and inns.

In Cossacks were entitled to duty on the goods transported ships on the Dnieper and Bug.

Stood Kamyanskiy January to 31 March 1734. This release date Cossacks under the protectorate of the Turkish sultan. Then Cossacks found refuge on the river underground. This January was one of the last in the history of Ukrainian Cossacks.

What can be seen now in place Kamyansko Host

In the early 20th century on the site of the camp Kamyansko archaeological work conducted by Dmitry and Viktor Hoshkevich Yavornytsky. Also their case in 1989 continued to scientists from the Institute of Archaeology of the USSR and the staff of the reserve on the island of Khortytsya.

Through this research it was established boundaries of contemporary Kamyansko camp, the ruins of huts, a suburb where there were shops, taverns and shops. It was also investigated Cossack cemetery where the grave is Kostya Gordienko. The cross on his grave, though damaged, but survived.

If you want to catch this place Cossack era - hurry, because it gradually eroded waters Kakhovka reservoir.

How to get here

Best to get here by car. Republican village is 50 kilometers from New Kakhovka. Or if you are traveling by public transport, have to go by train to Kherson. From there, change to the bus that goes to Nova Kakhovka and from there to get to the Republicans.

As you see, get to camp Kamyansko difficult. But believe me, you get extraordinary emotions, being in a place where everything is imbued with the Cossack spirit.

What is the best accessible to the Kamyanskiy January from: