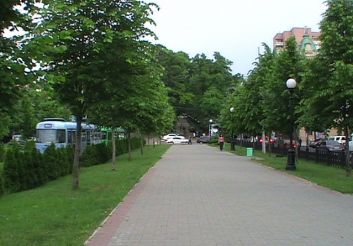 Karl Marx Avenue - the main street of Dnipropetrovsk . It is a cultural, administrative and commercial center of the city. Main Street, the length of which is 5 km away, is competing with the best streets of world capitals. Prospect, cut along the rail trams, covers almost the entire city, the train station begins and ends at Mount Potemkin garden on the banks of the Dnieper.

History of the Karl Marx Avenue

One of the oldest roads of the city of the founding coincides with the start of construction of Ekaterinoslav (now Dnepropetrovsk) since 1780. The original historical name - Ekaterinsky Avenue, 1923 was renamed the Karl Marx Avenue. Designed by architect IE Starov development the main street passed slowly. From 1847 made ​​works on cleaning and greening of the street, in the center of the highway was laid, and on both sides of the boulevard. Improvement accelerated after the construction and opening of the railway station and 1884. In 1903, the avenue became illuminate lights, opened the first cinema "Lux", "Modern" and "Palace".

The main attractions of the prospectus

A significant part of the street is lined with paving stones that resembles expensive streets in Lviv . Along the avenue there are many constructions of old buildings, which include a historical museum, housing the Mining University, the economic, geological faculty of Applied Mathematics and Dnipropetrovsk National University, the city executive committee. The street is full of sites and monuments, including: the monument "Eternal Glory" , a diorama of "Battle for the Dnepr" , the memorial cemetery of fallen soldiers of the Great Patriotic War monuments MV Lomonosov , Gogol NV , Paul N. , AF Fyodorov , VP Chkalov, M. Gorky , GI Petrovsky address 103 Avenue of Karl Marx is the Evangelical Lutheran Church of St. Catherine .

The most simple task that can stand in front of the tourist Dnepropetrovsk - find Karl Marx Avenue. Having arrived in this wonderful city, almost from the start station and the famous street stretches along the length of the river Dnepr in almost the entire city. Based on the avenue, you can focus on the areas and do not forget to visit the most interesting places of Dnipropetrovsk .

What is the best accessible to the Yavornytskoho Avenue from: