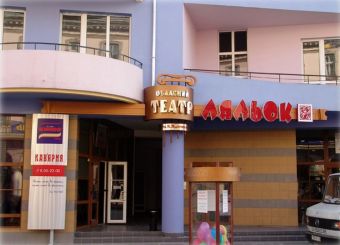 In the center of Ivano-Frankivsk is one of the oldest children`s theater in Ukraine - Puppet Theater named Marika Pidgiryanki. He was already 70 years old, and he taught several generations of viewers.

It all started in 1945: Stanislawska Philharmonic announced a set of actors and actresses. Announcement promised apartments and the dining room ...

His room at the time did not have a theater. He moved a few times, and finally, in 1981, the grand opening of the theater in the building where it is located, and at a given time. However, it resettled, and for putting the theater had to fight again.

Now in the repertoire of about 50 performances for children and adolescents.

Since 1991, the puppet theater is named after an outstanding compatriot - Marika Pidgiryanki. This pseudonym Mary Lambert-Dombrovskaya. It is more than 40 years dedicated to the children taught in school in the Carpathian village, she wrote poems and plays for young readers and viewers. By the way, the memory of it, and kept in her home village of White Oslavy Ivano-Frankivsk: they opened Mary Pidgiryanki museum and monument.

What is the best accessible to the Puppet Theatre. Pidgiryanki from: