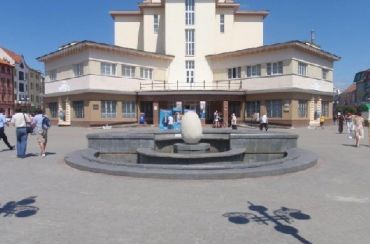 In the center of Ivano-Frankivsk there are quite strange in its unassuming sculpture in a fountain: a lump of concrete in the form of cracked eggs, from which protrudes a chicken foot. Fans of modern art are inclined to see in it a symbol of the birth of something new and wonderful. But more widespread not this grandiloquent interpretation of "image" ...

History and legend of the fountain

The fountain on the site was built in 1959 in the form of a column, which is decorated on the sides of plaster storks. But they were mutilated - the material was too fragile.

In the 70s of the 20th century fountain was reconstructed. It appeared the signs of the zodiac, and so he stood for about 25 years.

Cracked Egg appeared in the early 21 th century. Now tourists tell a story about what it erected after Viktor Yanukovych in 2004, when presidential candidates fell in Ivano-Frankivsk on strike "blunt hard object," which turned out to be an egg ...

But in fact, the sculpture in the fountain installed before the "egg assassination." It is associated with a local poultry farm, then with city leaders, in which there was such a strange reminder. "That Oniskino egg made the city face" - one of the jokes in the address of the vice-mayor. The sculpture is called and "Egg Shkutyaka", according to the mayor names.

At Easter sculpture is seen as the main city of the egg.

Fountain with egg is just opposite the town hall , is now the Museum of Regional Studies Ivano-Frankivsk. There are other, more elaborate fountain in the center. Of a small town it is now a musical fountain at the Veche Maidan. Not far from him and fountain with a statue of the Blessed Virgin Mary , and in the pedestrian zone at the Independence Street ( the so-called hundred meters ) - two fountains.

What is the best accessible to the Fountain Egg from: