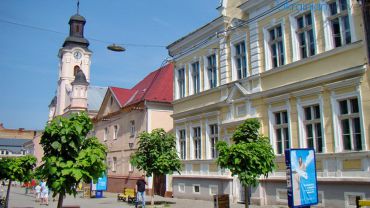 History of the House Gizella

The history of women`s education in Uzhgorod begins in the mid-19th century, when they began to appear the first private school. It should be noted that in 1848-1849, the city schools for girls altogether absent. In 1859, Bishop Michael Haas creates a fund, the main purpose of which was to create a church school for girls. Due to this, in October 1859 outside Kapitulna nurse opened the three-cabin school.

In 1862 the school was transferred to the streets of big, close to the Roman Catholic Church. However, this room was small and soon became unfit for the further development of the school. The new school building was built in 1902-1903, and then in 1907 it expanded and it became the present size.

In the early 20th century house in the walls Gizella united elementary school, a kindergarten, a boarding school, where both could learn 30 girls and handicraft courses and music. On the second floor there is a small chapel "Heart of Jesus."

The main decoration of the building was the dome, over which exalts the cross in the upper part of the facade was installed architectural jewel of the building - sculpture of Saint Gizella.

During the period of Soviet power house Gizella has evolved from a cross from the roof was removed and walled sculpture. She again became available for viewing until 1996.

Gizella - daughter of the Earl of Bavaria, who lived back in the 10th century. After the wedding, the Hungarian King István became the first queen in a Christian country. However, after the death of her husband Gizella harassed. To escape, she was forced to flee from Hungary to return to Bavaria, where she became a nun. After his death Gizzella was built in the face of the saints.

Gizella House in Uzhgorod is located at street Voloshin, 1, in the central part of the city. Here the tourist can get to Central Station Uzhgorod by taxi number 15, get off at "street Panas Peace."

What is the best accessible to the Gizella House from: