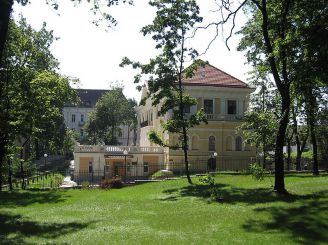 Baworowscy Library - the largest fortification on the territory of Lviv, which has survived to the present day almost in its original form. It is located outside of the Library, and one of its facades goes to Doroshenko. Arsenal was built in the 1630s.

Dominican Monastery of Mary Magdalene in the 17th century is located in Lviv defense ring, so in the case of his capture enemy defense the whole city would be under threat. Lviv Senyavskaya magnate decides to create a defensive structure to protect the church, with the result that in 1630 began working arsenal by architect Paul Grodzitskogo.

However, in the 17th century because of the threat of the Swedish offensive arsenal was transferred to a residence in the Old Senyavskaya Selo. The very same building in the early 18th century, passed over to the other wealthy families of the city - Czartoryski. Then the stable located here.

In the early 20th century Bavorovskih Library opened its doors to eager knowledge of Lviv and went public. Since 1971, it is named after the famous Ukrainian writer Vasyl Stefanik. In Soviet times, there worked the department of arts of the Scientific Library.

Features of the architecture arsenal building

Baworowscy Library building in Lviv is in the form of a rectangle, two-story, built of stone. The most powerful - the ground floor, built of stone torn. Before reconstruction in the late 19th century, it was covering the soil ball. East façade of the building is decorated with carvings.

Particularly noteworthy sculptures, which are located on the facade of the building and its interior, they are the work of famous Lviv sculptor A. Shimzera.

What is the best accessible to the Baworowscy Library from: