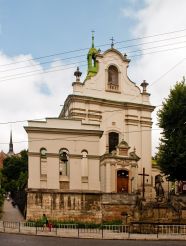 On the longest streets of Lviv - Lychakivska - is a beautiful temple - the church of St. Anthony. It is a famous tourist attraction with an ancient history dating back to the late medieval period. Fortunately, over the years, the structure of the church has not changed its appearance.

The building was not damaged during World War II, many historical buildings of the city. The Soviet period left its traces on the old home decor, unlike many of the Catholic churches of the city, which in the USSR was used as a utility room. Therefore, you can enjoy delightful paintings, stucco, created by artists ages 18-19.

The history of the church of St. Anthony

The Catholic Church was founded in 1718. At first it was a wooden church at the monastery of the Franciscans. The church was built with the assistance of family Vyshnevetsky princes who were influential dynasty of the 18th century in Lviv. Within 70 years, in 1784, the church became a parish that requires expansion. Thus began the construction of stone buildings that are still standing to this day.

Construction work on the improvement of the temple lasted for several decades. Designed by architect Markle amended the structure of the building. In 1818 the bell tower was built, which completed the architectural ensemble, and in 1845 finalized the interior. Rich decorations of the arches and the main hall are integral elements of the direction of the Rococo.

The main attraction of the temple is recognized as a grand staircase with a porch and a sculpture mounted on the left of the entrance.

During worship pastors preach both in Ukrainian and Russian and Polish. Nearby you can see the unusual church of St. Michael with a very expressive architecture.

What is the best accessible to the St Antoniy Cathedral from: