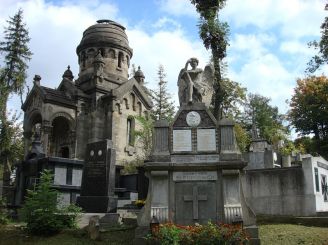 One of the oldest and naypompeznishyh memorial cemetery located in Ukraine, Lviv. This "Cemeteries". Its area is more than 40 hectares, and the list of known public and cultural figures who are buried here, has thousands of people. After all, here you can see the unique gravestones, made ​​famous by artists such as Eugene Dzyndra, Edmund Yaskulskyy, Abel Marie Perrier and others.

Rumor has Lychakivskyi heading for the cemetery at night, you can find a dark figure of a woman that walks down the street near the cemetery. Lvovyane say that once one brave young man tried to talk to this woman, but it turned out that it has no face. Unknown figure of a woman - not the last mystery Lychakivskyi cemetery. If you collect together all the legends which enveloped the place, their number will not concede many interesting hotspots should be seen in the Museum. Thus, one of the most interesting monument is the artist Arthur Hrotheru once in love with Wanda Monnet. Young couple met at the ball, and since then hardly be separated. Lovers often walked on lychaky, and Arthur once said that he would like to stay here forever. So when trydtsyatyrichomu aged man died of tuberculosis in France, Wanda sold all his valuables to carry the body of a loved one to the city and buried in the bast. Today, the legend of eternal love Wanda and Arthur tells all corners of the city, and some even said that he saw two young men who walk on lychaky, holding hands.

However, the most popular at the Lviv cemetery is the tomb of the bishop of Ukrainian Greek Catholic Church, Nicholas the Wonderworker Charnetsky. It is always lit candles are always fresh flowers. People believe that visiting a miracle worker, you can heal. Some come to the grave to ask for help, be confident.

To get to the Cemeteries very simple. It is a mile from the city center and public transport you can easily reach here. You do not have to wander alone Museum, because the Lychakiv conduct meaningful and interesting excursions.

What is the best accessible to the The National Historical and Cultural Museum "Lychakiv Cemetery" from: